Discovering Beauty:  The origin story of a theme park obsession

When the Eiffel Tower was built in Paris for the 1889 World Exhibition, not everyone was so keen on the new structure.  Some called this now iconic structure an eye sore that clashed with the older, grander architecture of the French capital.  Novelist  Guy de Maupassant would often eat at one of the restaurants at the base of the tower because that was one of the only place in the city where you couldn’t see it.  As time passed and generations have come and gone The Eiffel tower is one of the most iconic and most photographed structures on the planet.  When Disneyland Paris was first announced, built and opened in the early 1990s there was a similar response from the locals.  Now, I won’t rehash the relative failure that was Disneyland Paris (DLP) for the Walt Disney Company.  That subject has been exhaustively explored .  But if you want a living embodiment of what that failure looks like and subsequent consequences See the original iteration of Disney California Adventure.  30 years later, with every new generation growing up in Europe and specifically Paris, have always known a world where there is a Disneyland in the suburbs.  DLP has since become the most visited theme park in all of Europe.

When people think of Disney and specifically the theme parks, they see Sleeping Beauty Castle from the original Disneyland.  In fact it remains the Walt Disney Pictures logo.  Every Magic Kingdom Style park has a variation on this icon and a couple actually belong to Cinderella.  Of the 6 Magic Kingdom style parks around the world, Disneyland Paris’ Le Château de la Belle au Bois Dormant  (Sleeping Beauty Castle} is the best, most elaborate,  mysterious and if I may borrow from ts lead creative Tony Baxter, Beautiful

The interior of the Disneyland Paris castle is different from all others. You will find that it is very Gothic and was constructed to include details from other famous French buildings.

Sleeping Beauty Castle is the only Disney Castle in the world with its own dragon. The dragon was designed to resemble the dragons of European folklore, not ones found in Disney movies.

The exterior of this castle is deliberately situated so that it faces South. This was done so that the castle would not be backlit for those wishing to capture the perfect photo in front!

If you zoom your camera up close, you might be surprised to find snails climbing on of the turrets and fleur de lis in the design of Sleeping Beauty Castle in Disneyland Paris.You will also find that each turret features a different decorative weathervane!

It is easy to walk straight through the Disneyland Paris castle, but you might want to take the stairs to the second level where you will find La Galerie de la Belle au Bois Dormant, a gallery of displays that tell the story of Sleeping Beauty.

There are several tapestries hanging in the castle, but the one you will most enjoy is the one of Sleeping Beauty on her deathbed.

The spinning wheel is placed right in front of it and is spinning out of control.

Along with the beautiful stained glass and woven tapestries, you will see a beautiful statue featuring Sleeping Beauty dancing with her prince.

Perched along her dress are the three fairies.

While the Disneyland castle is bright and cheery above ground, below ground is a whole different story!

Make sure that you venture beneath the castle to see what lies below!

Deep below the castle you will find “La Tanière du Dragon.”

Once the ruler of the skies, this defeated dragon lies chained against jagged rocks. You may find it sleeping, but know that it does awaken and isn’t very happy when it does!

Disneyland PAris was the second Disney park I had visited after having grown up at Disneyland.  While I was employed in Guest Control at Disneyland after graduating High School, I was transferred to a California Themed Event for DLP’s 5 Year anniversary.  I distinctly remember walking into that park and being so blown away at the subtle and yet very dramatic differences between Sleeping Beauty castle in Disneyland and the castle of the same name in Paris.  I imagine it would be challenging as an imagineer to design a castle in Europe when there are actual castles down the street to compare it to.  Thus, the imagineers made it more of a fantasy castle modeled after Eyvind Earle’s original artwork for Sleeping Beauty, the 1959 Disney Animated Film.  This is reflected in DLP’s castle on a hill while still being grounded for guests with disabilities almost in an MC Esher sort of optical illusion

Upon first entry in 1997 into Disneyland Paris and exploring this familiar, yet totally different main street, I marveled at the beauty of this living piece of art.  Then, when I explored further and discovered  a dungeon with a fire breathing dragon?!  I was hooked!  It was at that moment that the world of detail and discovery through the exploration of the Disney parks around the world began.  I have since visited every other Disney park in the world (Except Shanghai) at least once and have found new levels of fascination at every new park and every new discovery.  For example: Did you know that one of the ballrooms at the Hong Kong Disneyland hotel is 888 square meters?  That is because the number 8 is considered an auspicious number in Chinese culture, signifying fortune.  If you look down at the ground in Liberty square at The Magic Kingdom, you might find that the center of the street is brown concrete instead of red. This is because in the time this land is set in the late 18th century, there was no indoor plumbing, so people would toss their waste into the street creating, for lack of a better term, a river of poop.

How about the fact that at Tokyo Disneyland, they have over 20 different flavors of popcorn.  Flavors range from salted and caramel to soy sauce and shrimp.

Or my favorite fact: California Adventure in Anaheim, used to be crap, and now it’s an OK Theme Park.  There is no limit to the number of interesting details and facts I have discovered over the years.  I am a part of a podcast that does nothing but do deep dive explorations of history, hidden details and secrets of every facet of the domestic Disney theme parks with hundreds of hours of content and we’re just scratching the surface.  Now, I am a part fo the conciears family of planners where I get to share my love and knowledge of these magical worlds.  My love and fascination grows with every visit.  And to paraphrase Walt Disney,  it all started, with a dragon. 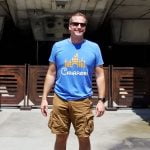